Thanks to a grant of £9,000, Harrogate Hospital Radio – a charity which first took to the airwaves in 1977 – has been able to refurbish its off-air studio with a state-of-the art mixing desk and associated furniture.
Provincial Grand Master John Clayton 'took to the air' during a recent visit, the radio station being just one of the charities to benefit from the £223,500 Queen’s Diamond Jubilee grants.

Harrogate Hospital Radio presenter Ellie Jackson, whose original approach to W Bro Michael Walker, of Vale of Nidd Lodge No. 4984, led to the successful application, used the opportunity to interview RW Bro Clayton about Freemasonry, its history and 'secrets'.
RW Bro Clayton also spoke about the TLC (Teddies for Loving Care) scheme – of which Harrogate District Hospital is a beneficiary – and recorded a number of messages wishing patients a speedy recovery.

RW Bro Clayton said: 'Harrogate Hospital Radio is a wonderful charity and I’m delighted we have been able to support this worthwhile cause. It is highly regarded by patients and staff alike and plays an import role in hospital life.

'It’s always gratifying to be invited to see how our donations are being put to good use.'

Harrogate Hospital Radio Chairman Iain Wighton said: 'We are indebted to the Freemasons for their incredibly generous gift. In particular, I’d like to thank members of Pateley Bridge’s Vale of Nidd Lodge for nominating us in the first place.

'Thanks to this donation, and that of a number of other organisations, we have been able to upgrade our second studio to the same standard as our main, on-air studio.'

He added: 'Harrogate Hospital Radio’s first broadcast was 35 years ago, and our equipment then consisted of one record player, one reel to reel tape recorder and a microphone.

'Through to successive appeals, the support of numerous local organisations and members’ own fund-raising activities, we can now justifiably boast to having some of the best broadcasting facilities anywhere in the Yorkshire region.'

As Published in Freemasonry Today
Back 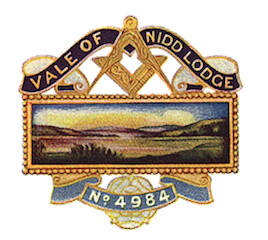 Why Not Come and Join Us
We welcome new members and look forward to hearing from you.
Your Enquiries Welcome: info@valeofnidd.co.uk